Cardano (ADA/USD) hits a new milestone, but where are the buyers? Cardano hit the highest level of assets minted on the blockchain.

ADA remains on a downtrend and could find lower levels.

The number of assets minted on the Cardano (ADA/USD) blockchain has hit a new milestone of 7,055,456. The increase in the native assets comes after the Vasil hard fork in September. It shows the impact the upgrade has played on attracting users to the Cardano blockchain.

Further statistics show that as of November 25, the number of projects building on Cardano was 1,146. According to Cardano Weekly Report, there were over 55.3 million transactions on the blockchain as of the date. In summary, there are 106 projects launched on the blockchain and 3,759 Plutus scripts.

However, the increase in activity on Cardano has not been reflected in the price. As of press time, ADA was trading down 3% in the last 24 hours. A technical outlook shows that ADA is on a sustained downtrend.

ADA on a downtrend amid increased on-chain activity 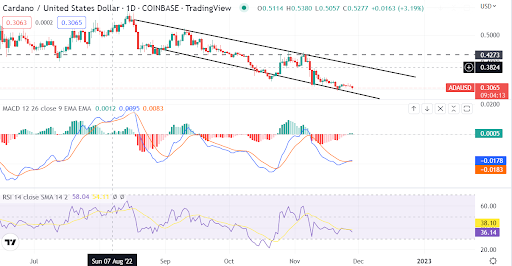 Technically, ADA is bearish. The cryptocurrency trades near its lowest level on a descending channel.

Momentum is weak for ADA, with the MACD indicator remaining below the neutral zone. The RSI is near the oversold level, with a reading of 35.

Is the bottom near for ADA?

There is no clear bottom price for ADA. Although activity is building on the blockchain, investors are still cautious of the native token as the bear market ravages.

For a potential bullish reversal, ADA buyers must counter the bearish channel. The key level to watch for a bullish reversal is $0.42. This is the established resistance where the ADA price formed multiple bottoms before crashing lower.

Where to buy ADA

eToro offers a wide range of cryptos, such as Bitcoin, XRP and others, alongside crypto/fiat and crypto/crypto pairs. eToro users can connect with, learn from, and copy or get copied by other users.

Bitstamp is a fully regulated company which offers users an intuitive interface, a high degree of security for your digital assets, excellent customer support and multiple withdrawal methods.

Why did Bitcoin price go down today? BTC traders brace for $23K retest

Founder of Crypto Scheme My Big Coin to Serve Over 8…

Indonesia will launch its national crypto bourse by June